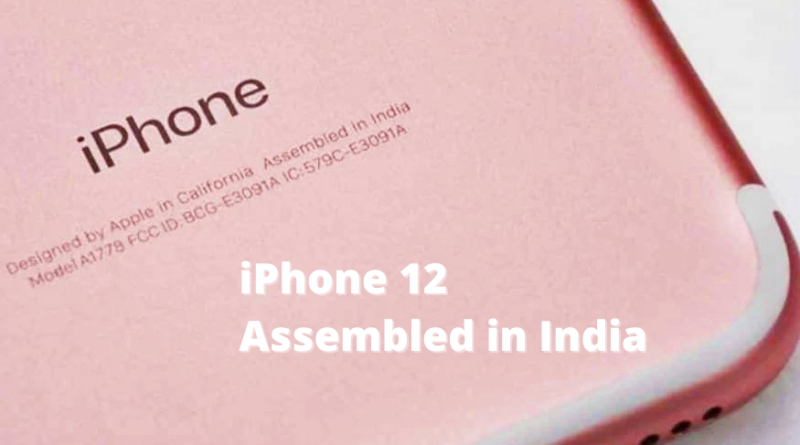 iPhone a pioneer phone holding technology of times ahead. Every year more than 200 million pieces of iPhones are sold all over the world. It is the biggest success story in the smartphone industry. Apple earned $ 142.38 Billion in 2019 and $ 111.34 Billion till Q3 of 2020 from iPhones only. This signifies that the iPhone is a crucial product for Apple and no matter what Apple couldn’t leave it.

It also encourages Apple to take its production seriously. The large numbers of iPhones are still produced in China until today. But, It is predicted that iPhone 12 Pro may be manufacture in India in large quantity. Apple has a relationship with China back from 2001 from the age of iPods.

Some of the factors really support this prediction and we are just going to discuss more in this blog.

In 2017, Apple started assembling iPhone SE in India, then 6s in 2018 and iPhone 7 in 2019. Of course, the phone is old looking at the trend of production. The launch year and production years vary. But for the Indian market, it’s the right time because Indian customer usually goes for an older iPhone version because of the price. Wistron did all the early assemblies of iPhone in India in its Banglore plant.

In 2015, Foxconn (Apple’s Major iPhone Assembler) came to India and promised to open 12 new manufacturing plants. It signed an MOU with Govt. of Maharashtra with an investment of $5 billion within 5 years. In the starting years, it manufactured Gionee phones. Foxconn also produces accessories for iPhone and other Apple products. Till date, Foxconn has 2 plants up and running in India. Foxconn initially planning to set up 12 units in India may be other plants are about to come online soon.

India in April of 2019, launched Production Linked Incentive Scheme (PLI) for large scale electronics manufacturing. This attracted many new players as well as Foxconn to drive investment into India. India plans $6.6 billion is for smartphone makers to help them expand their business in India. The incentive of 25% on capital expenditure for the companies who apply under this scheme.

The incentives will also be provided for the production of semiconductors, electronic chips and other mobile components. Other state governments also aided the smartphone manufacturers with other incentives like 25% incentives on land.

The international mobile phone manufacturing companies that are approved under the Mobile Phone Segment of PLI scheme are Samsung, Foxconn, Rising Star, Wistron and Pegatron.

Out of these, 3 companies namely Foxconn, Wistron and Pegatron are manufacturers for Apple iPhones.

In 2019, Foxconn started production of iPhone XR in India, in its plant near Chennai. As I said above the iPhone chargers are also made in these regions.

In July 2020, Foxconn announces $ 1billion investment in India and Pegatron another Apple’s contract manufacturer registered its subsidiary in India. In the same month, Foxconn started assembling Apple iPhone 11. This was the first time when a top of the line iPhone is made in India. Previously Apple only manufactures cheaper or old models theirs. This will save Apple in 22% on export duties and when passed on to the customers it can take a major part of the Indian smartphone market.

Then in Aug 2020, Wistron started manufacturing iPhone SE in India and began trial production of iPhone 12 in India. Times of India reported that it may shift around six production line to India.

Over what happend and happening there are other logical factor the contract manufacturers as well as iPhone is shifting.

As China is rising the became the manufacturing hub of the world their lining standard so as their wages rise relatively. in 1990 the average wage in China is $150/year now it’s $ 13960/year in 2019. In the other case if we consider India the average salary is around $5200 / year in 2020. This also makes Indian production unit’s outputs cheaper. So this an advantage that the companies can use to set up their manufacturing units. Even the GDP of both countries will forecast the same.

The second thing apple considered here is the market of India itself. India is the 2nd largest mobile market, ahead of US with 400 million smartphone users. More than 30 % of smartphones are in the range of $149 – 244. For a basic relative measure lets, compare Apple iPhone SE 64GB price, it costs $ 474 in India. In the US the same model costs $ 399. The difference of 75 USD in the low-end phone of Apple. The Apple phones are usually overpriced in India so the people may not like to buy one. This problem will automatically solve after manufacturing plants are set up there.

Many Analysts are predicting more than 60% of the production of iPhones will be a part of Export.

Still, Problems exist in India, and companies have to overcome those possible hurdles like the high cost of the setting of factories which will be helped by the Govt. of India by PLI scheme.

The main problem that exists is the high cost of training employees. Govt from its end in India keeping this situation in the eye had trained lakhs of people under different programs like Skill India program, DDU-GKY, National Skill Development Corporation (NSDC) etc.

Rather than all factors, we considered for the swift of apple from china to India can also be the US-China Trade war. And it seems like Apple doesn’t want to stuck in between these Diplomatic congestions. Speaking of 2019 China Still hold 90% of iPhones production and Apple don’t want a loss for any future diplomatic uncertainly. In the other hand, India is encouraging investment in its country with aids and opportunity of a large market standing. If this happens the Make in India program of India will be a great success.

Now just we have to see what Apple does and how does its contract manufacturers provide him with the products it wants in-betweens of diplomatic situation.

Will India could be the next manufacturing hub for the world? Could we ever see every iPhone with Made in India Stamp on it?

Let us know in the comments below.